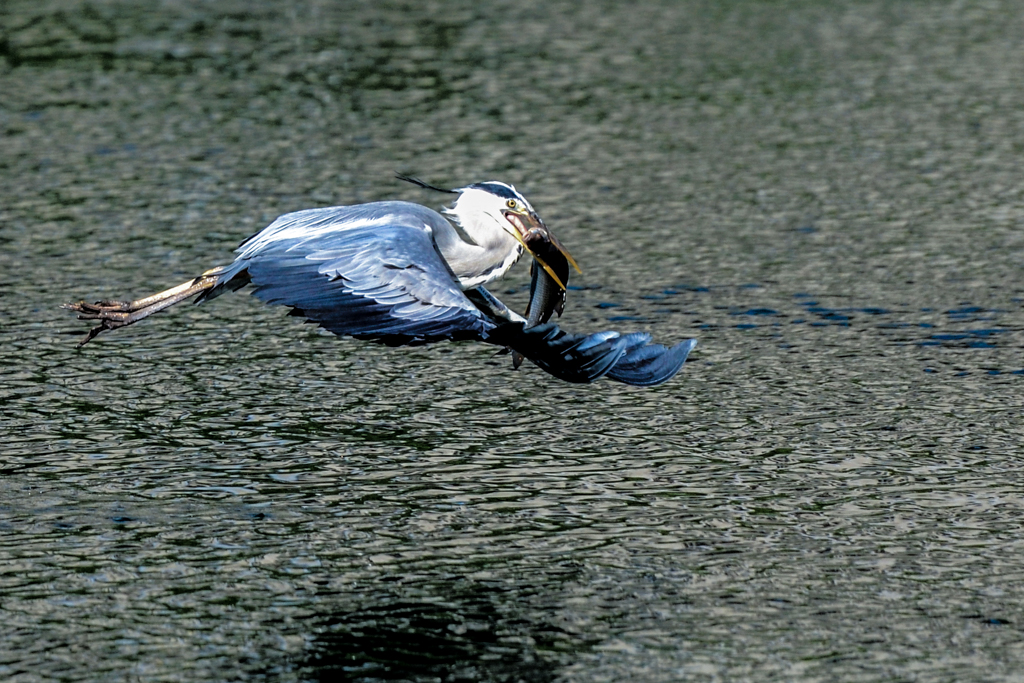 A few Grey Heron shots from my archive

I have screwed up a lot of shots in the past and I am sure I will miss some great photo opportunities also in the future. Therefore I constantly go through my archive, look at old pictures and ask myself what I could or should have done better.

Today, we look at some older Grey Heron (Ardea cinerea) pictures and discuss whats good and whats bad about them. Grey’s are great to photograph, specially for beginners in bird photography, as they are large and usually move slow.

Grey Herons are large wading birds and belong to the heron family. They are quite common where I live (Switzerland) but they can be seen in many European, Asian and African countries. Grey’s look very similar to the Great Blue Herons that are very common in North America (they belong to the same Genus anyways). Grey Heron either hunt along rivers and lakes or on meadows. They can often be spotted wading through low level water or standing on a river bank. Their main prey likely is fish but I see them hunting frogs or small mammals like moles or mice. They have an amazing hunting technique as they can stand still (like frozen) for several minutes and then strike and catch prey withing a glimpse of a second.

The following three pictures where my first „ok“ Heron pictures taken at the lake of Zurich back in 2011. I still love the series, as they show pretty well the hunting behavior of the birds. The first picture tells us that the animal will strike as its head is slightly bend towards right. This is the only movement you may see for a long time when observing hunting Herons. They will stay frozen for minutes but as soon as they start moving their head towards one side you have a great chance for a catch. If the catch you have to be very fast and you have to make sure your camera settings are supporting the action.

Camera settings for this action
This is the tricky piece about Herons (probably applies to all Heron species) – they move very slow but they strike very fast and you and your camera have to be prepared. When I started taking Heron pictures I always had my camera at about 1/1000s as I thought this will be fast enough for such big and slow Waders. I was proven wrong; many times. Taking a striking Heron with 1/1000s is like taking a long time exposure image of these guys. These three pictures have been taken with 1/3200s at f/2.8 and to support that, I had to push ISO to 1000. Back then I had a Nikon D7000 where ISO 1000 already starts doing some damage to the image (in my opinion, I will write about ISO in another post).

Whats good about the pictures
As said, I like this series. Keeping in mind that I have taken them right at the start of my photography journey I am actually very happy with them. 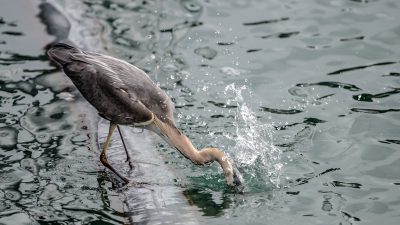 They are taken in the „right“ moment. They tell a story of a Heron that is about to strike, they show the action and end result – the bird with its prey.

What I could have done better
This is an unfair comment, as I have upgraded to FX and my D750 is way more generous in terms of ISO but I would definitely not shoot with f/2.8 anymore. 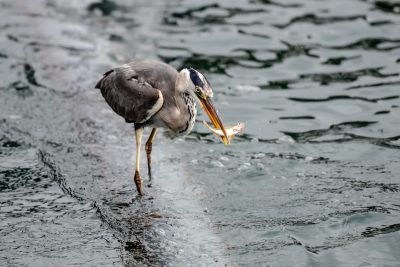 The depth of field in these shots (I also will write an article about that) is around 10 to 15cm but there is no background that could result in a nice bokeh. If I would have stopped down a bit, the photographs would have been much sharper. Specially the one with prey. There the fish’s eye suffers quite a bit with regards to sharpness. So now you understand the comment about ISO, as to stop down, I either could have decreased the shutter speed or pushed the ISO. This already brings me to point two. Shutter speed. I think in the picture where the Heron strikes, a faster shutter speed would have frozen the water drops more and would add a lot more drama to the picture.

What have I learned from these pictures
Whenever I photograph hunting Herons, I stop down and shoot faster. Sharper and more drama.

Lets look at a new example. The following two pictures show a Grey hunting in a very rare way – jumping into the water, head first. I have been photographing Grey Herons for the last 6 years and I have not come across such a behavior no more. The thing here is, that I wasn’t prepared for this. I was lucky that I somehow managed to get a relatively good picture of the scene. If I would have „known“ whats going to happen, the picture likely would have turned out better. Again, looking at the settings, I had plenty of room to stop down a few f-stops as 1/8000s is way to much for this. I know juts before I have been saying that I should have taken the above series with a faster shutter speed but one cant compare the movement of the animal. 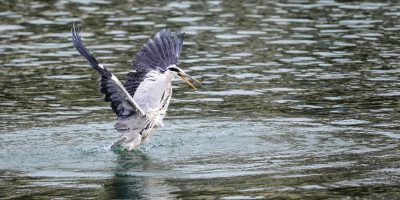 In the first series, the strike of the head is way faster as the large bird divebombing the water. I think I easily could have taken the shot with 1/3200s but stopped down 2 stops to get a sharper image.

What have I learned from these pictures
This is less about settings or technique this is rather about expecting the unexpected. This situation taught me that everything can happen. These are wild animals and they don’t always follow their „pattern“. As a wildlife photographer I always try to think what the animal thinks and having said that, at this very moment the Grey thought, lets jump into the water but I obviously didn’t. This learned me to look out over the edge of the plate.

My wife spotted this little guy, as I didn’t expect a Heron hiding behind field flowers. This may falls a little bit in the learning’s from the above picture. Always expect the unexpected. I like the picture, as it is kind of something different. Unfortunately there is a bridge in the background (one can only see the poles) that kind of makes the nice tree colors look like a little odd.

What have I learned from this picture
This was a tricky shot, as with all the flowers I easily could have missed its face (and in fact I may have, as the image lacks sharpness). This is why I have stopped down but for some reason didn’t think about shutter speed. Hand holding the 70-200mm at 200mm usually is not a big challenge but at 1/400s it might becomes one. I think the main reason why the image isn’t sharp enough is mainly because of the shutter speed. I could have pushed the ISO a bit to support a faster shutter speed.

I usually take pictures of animals at eye level. The next image was different however. I was walking with the dogs and we crossed a bridge. Below the bridge I spotted a Grey hunting. I was like, Nah, not gonna happen. Why should I take a picture from above, as it will look like flat. But since I am always carrying my camera with we, I took a quick shot. When checking the picture, I realized that the Heron kind of melts seamless into the background as there was a lot of nervous water (likely due to the low water level and many stones). I tried a few angles and settings and finally f/4 at 1/640s worked best in this situation. I remember that I would like to have stopped down a bit more, but I was already at ISO 400 and I was afraid that the noise would kill the quality of the image (as said, I will touch the ISO topic later).

What have I learned from this picture
This is my favorite Grey Heron image and maybe it’s even my favorite Heron image (I have photographed over 10 Heron species). This image helps me to understand two important things. First, always try something new and second, always take a picture. I easily could have missed that because of my ignorance. This lesson was an important one for me. I now take always a shot, just to test how stuff looks like even if I don’t think it would be any good. Don’t get me wrong, usually I can trust my instincts – but not always though.

4 Replies to “going through the archive – grey heron”