Before we start some nerd alert on the difference between diurnal and nocturnal birds of prey (having said that, I am not a biologist nor a professional ornithologist, I just read a lot about birds – this article is based on best of my knowledge). Most diurnal (active during the day) birds of prey are either part of Order Accipitriformes or Order Falconiformes. I believe (if I am not mistaken) Species of Order Falconiformes have once been part under Order Accipitriformes and later split out. Okay… in other words, Eagles, Hawks, Kites, Buzzards, Ospreys, Harriers etc. are part of Accipitriformes whereas Falcons, Hobbys, Kestrels etc. are part of Falconiformes. Nocturnal (active during the night) birds of prey are in most cases part of Order Strigiformes. We know them better as Owls. Today I would like to share some amazing facts about diurnal birds of prey – also know as raptors. So lets start with some facts about diurnal birds of prey. 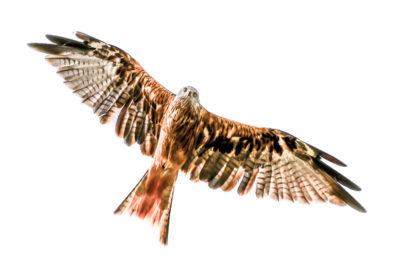 When I was a child I always asked myself on how birds of prey can spot its prey from far above. My father always told me that its because of their sharp eyes. This is of course perfectly true – diurnal birds of prey are well know for their excellent sharp vision. It is likely their most important sense as they are visual hunters. However there is something else besides their sharp vision. Many raptors have the ability to see in the ultra violet light range. Mice and voles (like many other mammals) are territorial and mark its territory with urin – and guess what – this markings absorb ultraviolet light. Raptors equipped with this skill therefore have a big advantage in respect of hunting and I can imagine when they are soaring over open field they see highways of mouse tracks. In case you want to read more about those amazing animals and their vision you will find tons of information here 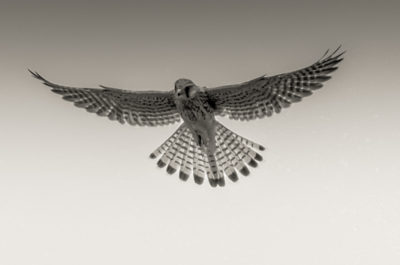 Hovering is a common behavior seen in many bird species whereas the little hummingbirds are likely the most professional hover creatures on the plant. Birds of prey mainly hover while hunting. I believe that in theory this is not true hovering but rather wind hovering. Meaning that the birds don’t remain in the same position because of its fast wing beat but mainly because of thermal reasons. As just said, hovering describes a behavior where the bird remains motionless at the same position. Amongst raptors, Kestrels are probably the species that have mastered these technique to its fullest (the bird in the feature image of this article shows as well a hovering kestrel – not a common kestrel but a nankeen kestrel). I assume this is mainly due to its relatively small size and fast wing beat. Larger raptors like buzzards, kites or ospreys hover but can’t remain in the same position very long (and need a lot of wind). Kestrels however can remain positioned for several minutes (also in low wind conditions). While hovering, the birds can observe the ground and attack prey instantly. 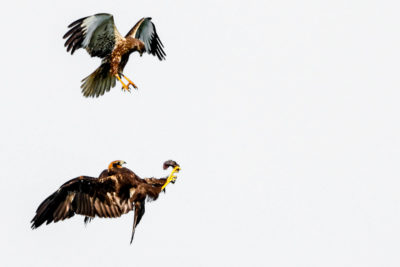 Most birds of prey return with prey to the next when feeding its chicks. However harriers (I also have seen that behavior by some kite species) don’t follow this pattern. Usually (at least of what I have observed) male harriers hunt and (when successful) on the way back to the nest start „calling“ their female. The female animal is then approaching the male from below whereas the male drops the prey in the air and the female catches the same and returns to the nest. The male bird turns and starts hunting again. I was lucky enough to witness this a couple of times but unfortunately harriers are pretty rare where I live, hence I didn’t had much changes to take shots.

I have been observing this behavior in many bird species (hence this is not a raptor behavior) in many different places and it helped me many times photographing birds in flight. Its about the moment when perching birds start flying. When I started taking pictures of birds, I always wanted to catch flying birds but they always where to fast for me. Once I discovered the following behavior I started catching birds in flight. So lets reveal the secret – birds poop before they take off – and in reverse psychology – when a perching bird poops there is a very big likely hood that the bird takes off. What an awesome comment to end this article 🙂 stay tuned.

By the way, if you are intrested in owls, check out the following page: