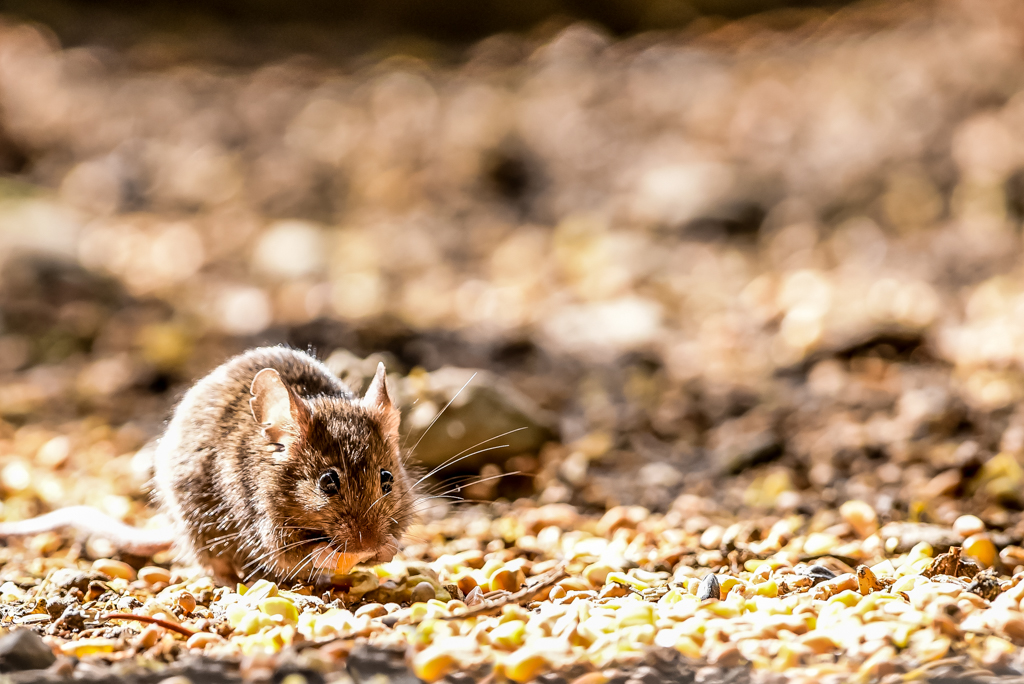 I have mentioned several times that the concept around Depth of Field (DoF) is for me one of the most important things in wildlife photography. Therefore it’s time to discuss some thoughts about depth of field. When I started with (wildlife) photography, I always thought that shooting wide open with max aperture is the key to success. For some reason I believed that expensive lenses come with large aperture and one should always take advantage of the same. Don’t get me wrong, shooting at 500m with f/4 can be a beautiful thing and produce a wonderful bokeh (please note that the quality of the bokeh not only depends on the DoF but on many other aspects) – but not always. It can damage a picture entirely. While going through my archive, I stumbled upon the following mouse pictures. I still remember the frustration I had, when I missed some of these shots. As always back then, I tried to make my equipment responsible for it, but when analyzing the situation back home, I realized that I screwed up.

But first things first – What is DoF at all?

Depth of Field (nicely phrased by Wikipedia) is the distance between the nearest and farthest objects in a scene that appear acceptably sharp in an image. Or in other words, if one focuses on an object, there is a far and a near limit where in between the object still appears sharp. The Depth of Field depends on f-stop, focal length and distance to the target. The closer one gets to the target, the shallower the DoF will be. The larger the aperture, the shallower the DoF. Nasim has put a lot of effort into a great article about understanding aperture for beginners that I can highly recommend.

My parents have a small henhouse (a little hen sanctuary) and Bruno the mouse has been stealing corn. My mother always complained about Bruno but I accepted the challenge as I have never been photographing a mouse before. I had to shot him in a very uncomfortable position as I wanted to be on eye level with Bruno. My mother probably thought I lost my mind, when I (covered in camouflage) was lying flat in front of the henhouse pointing with a 500mm lens to a small mouse. Mice are extremely shy as they are on the menu of many raptors and therefore mostly hide. In this situation they only came running out to grab a piece of corn with their little hands, and run into their hiding place again. This made it very difficult to take a picture as one can imagine to focus on such a small animal running back and forth isn’t the easiest thing.

Bruno and the Depth of Field

Lets look at the picture of Bruno that I completely screwed up and lets try to understand what went wrong. It is a great example about analyzing the Depth of Field. You can see that his ears are sharp whereas his eyes and nose are blurry – and with this the picture destroyed. You also can see that quite a bit behind the mouse is sharp. This tells us, that the focus point is not on Bruno’s head but just slightly behind it (likely somewhere in the middle of the hole in the ground where he sticks his head out). Bruno popped up, quickly checked the surroundings and after a second or two disappeared again. To focus precisely in such a moment is rather tricky specially when the head and the edge of the hole is on the same horizontal level. We know from the EXIF data (I explain in the picture below) that I have been 4.73m away from the mouse. There was very little light available and for this reason probably I have shot wide open with aperture f/4.0 – stupid me. I still would have had plenty of room by pushing the ISO (the D750 works still great with ISO 2000 – 3000) and with this stopping down a few stops. If I would have done so, the depth of field would have been larger and the entire head would have been sharp.

Understanding Depth of Field
Getting a feeling for Depth of Field requires some experience. However, there is tools that support you understanding the same. I am using the free LR plugin „show focus point“. It works great and gives you some very neat information about your picture. It not only tells you where you have focused, but it also tells you the distance to the subject, the used aperture and with this the near and far limit of the Depth of Field. In the below picture you can see that the focus point is straight on Bruno’s head. The distance is 4.73m at f/6.3. The Depth of Field results in 3cm (1.5cm in the front and 1.5cm in the back of the focus point).

You can see how clear the mouse eyes are. The ears are still sharp so is the little tiny nose. The little fingers however already start getting blurry and this for good reason as a Depth of Field of 0.03m is very shallow. Still good enough to have a sharp image though.

You can see that with f/4 we lose 1cm of Depth of Field. This doesn’t sound like a lot but think about the size of Bruno’s tiny little mouse head. I know it sounds like crazy but 1cm can decide if a picture turns out nicely or completely makes it useless.

If you are hungry to read more about DoF and aperture make sure you check out a beginners guide to aperture and Depth of Field on photographytalk.com.