Difference between ravens and crows

Soon the veil between the worlds will thin as Samhain is near. Depending on your beliefs you may be in the preparation for Halloween, All Saints, All Souls, or Dia de Los Muertos festivities. In all those celebrations ravens and crows play a major role. I thought this is a good time to look a bit closer at the difference between those birds. Some time back I have been writing an article about raven and crow symbolism and you may want to go through that as well.

The most common raven and crow species in Europe (of course depending a bit where you live) are:

difference between those 4 species

Let’s first look at those 4 species.

I would think that it is quite obvious to identify a rook or a hooded crow. Rooks have a very distinctive beak whereas hooded crows are two-colored – black and grey. However, if we try to distinguish between common ravens and carrion crows things might get a bit more complicated.

I have put a few different ideas together on how the two birds can be identified.

Common ravens are much larger and heavier than carrion crows. However, this won’t help us in case we don’t see both animals together. Hence we need to find something else to distinguish.

A Carrion crow tail in flight differs from a Common raven tail – but this is not always like that. 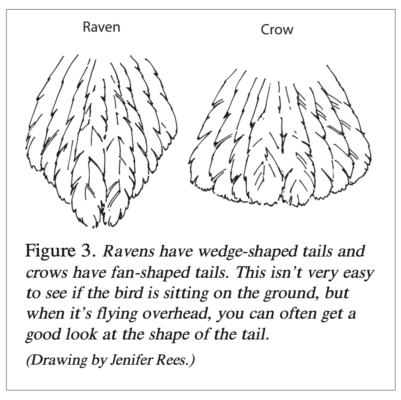 I have added here two images of a common raven. One animal has a very distinctive raven tail whereas the other bird doesn’t.

Most times when I see common ravens and carrion crows flying they have their tail tight though and one hardly can distinguish whether it is more a wedge- or fan-shaped tail. Hence we need to look at other details to distinguish between the two. In the below comparison you can use the bill to identify the species.

Below you have two samples where the beautiful birds are spreading their tail feathers to the max.

Last but not least I think the beak is one of the most typical elements to distinguish between a common raven and a carrion crow. If you investigate this in all the pictures you will see that the common raven has a massive beak compared to the rather delicate beak of the carrion crow. Also, the raven’s beak is curvier than the one of a crow. Both species have bristles at the base of the beak whereas the raven’s bristles are longer.

Despite we took some time to analyze the differences between ravens and crows it still might be a bit tricky to tell if a common raven or carrion crow is perching in front of you.

Here are a few more images where I have added a couple of more Corvidae species. If you look closely at the tail of the last common raven picture on the bottom left you clearly can see the wedge-shaped tail.

Samhain is one and likely the most significant of the four Gaelic moon festivals. It marks the end of the harvest season and the beginning of the „darker half of the year“. People believing in the old religions celebrate Samhain at the day halfway between autumn equinox and winter solstice (wheel of the year) which usually falls somewhere between October 31st and November 1st. However, my wife and I follow the cycles of the moon and therefore we celebrate Samhain at the 11th new moon of the year. During Samhain, the veil between the worlds is at its thinnest allowing spirits to cross between realms and enter our world. Amongst many stories, it was the triple Goddess Morrigan who appeared during Samhain. The Goddess of war was associated with hooded crows and ravens being able to transform into those and flying over battlefields controlling the outcome of wars.

A little cat playing with a mouse

Last day of the light half of the year