Today I was walking the dogs in the park and as always had my camera with me. We met a friend who was asking a couple of questions on how to adjust the camera settings „properly“. I have been thinking all day on how to easy explain that and decided to write down the fantastic three.

If you are new to photography you may use your camera in automatic or semi automatic mode. There is of course nothing wrong with that but I would like to encourage you to use your camera in manual mode so you can manage all the settings yourself. To do so, you should learn on how to use the fantastic three: Shutter speed, aperture and ISO. I hope this little article will help you.

I have been using toys for demonstration purposes. I am not making any money with this article nor am I selling those toy pictures. I am not owing the copyright of these toys. I am just saying that as there have been some lawsuit cases on toy photography.

Why should you use your camera in manual mode

Cameras usually come with automatic, semi-automatic (such as aperture- and shutterspeed priority or auto ISO) and manual mode. Those automatic and semi-automatic support features can be a big help for beginners. The camera will take certain decisions based on the mode and with this influence your image. It is like a computer without a soul and will always calculate the best possible result based on its algorithm. I only can speak for myself as I don’t want to outsource the responsibility of creating a great picture to this machine. The only exception is when an image turns out bad, than of course I blame the camera.

Definition of the fantastic three

I would think that shutter speed is relatively easy to understand. As mentioned above it regulates the amount of time your sensor will be exposed to light. The faster your subject is moving the faster your shutter speed should be to freeze the moment. On the other side, if you want to do some long time exposure you would need a slow shutter speed. Terms like slow and fast are of course very relative and depend on the situation and shooting condition (handheld, tripod, lens focal length, and others). The fastest and slowest shutter speed possible is given by the camera model used. A quick example to demonstrate that choosing a „good“ shutter speed has a lot to do with your observations skills:

Aperture might be a little bit trickier to understand as it has many aspects to consider. As mentioned above the aperture controls the amount of light that travels through the lens. The aperture is given by the lens whereas usually the widest aperture is labeled on the lenscoat such as ƒ/1.8. The position of the aperture setting is called f-stop.

When photographers are saying they had to stop down, they usually mean that they had to change the aperture from a smaller to a larger number (e.g. from ƒ/1.8 to ƒ/4). It might be confusing that the aperture of ƒ/1.8 is „bigger“ (wider open) than an aperture of ƒ/4. If you are looking at the following example you will easily understand that though.

So this means the smaller the aperture number (f-stop) the more wide open the lens will be and the more light will get through. 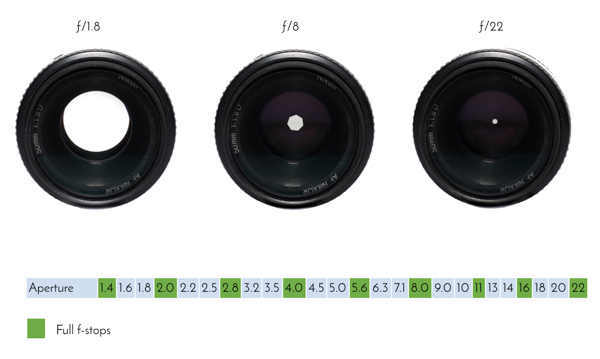 The aperture not only controls the amount of light but is also one of the major driver of the resulting depth of field as well as the bokeh.

ISO in photography tells your sensor on how bright a photograph should tun out (it’s wrong to say that ISO describes the light sensitivity of the sensor, as the sensor has only one sensitivity towards light). The higher the cameras ISO is pushed the brighter the image will turn out. This is specially in low light situation an advantage. ISO however comes at a certain cost in form of grain. This is called noise in photography. It’s advisable to shoot with low ISO values whenever possible as this will reduce the risk of noise.

Depth of field (nicely phrased by Wikipedia) is the distance between the nearest and farthest objects in a scene that appear acceptably sharp in an image. Or in other words, if one focuses on an object, there is a far and a near limit where in between the object still appears sharp. The depth of field (DoF) depends on f-stop, focal length and distance to the target. The closer one gets to the target, the shallower the DoF will be.

I have done a little setup for you to better illustrate depth of field depending on the aperture.

You can see that the more wide open the lens is, the shallower the depth of field results. At ƒ/1.8 only Darth Vader is in focus whereas at ƒ/20 we can see even Sponge-bob clearly. 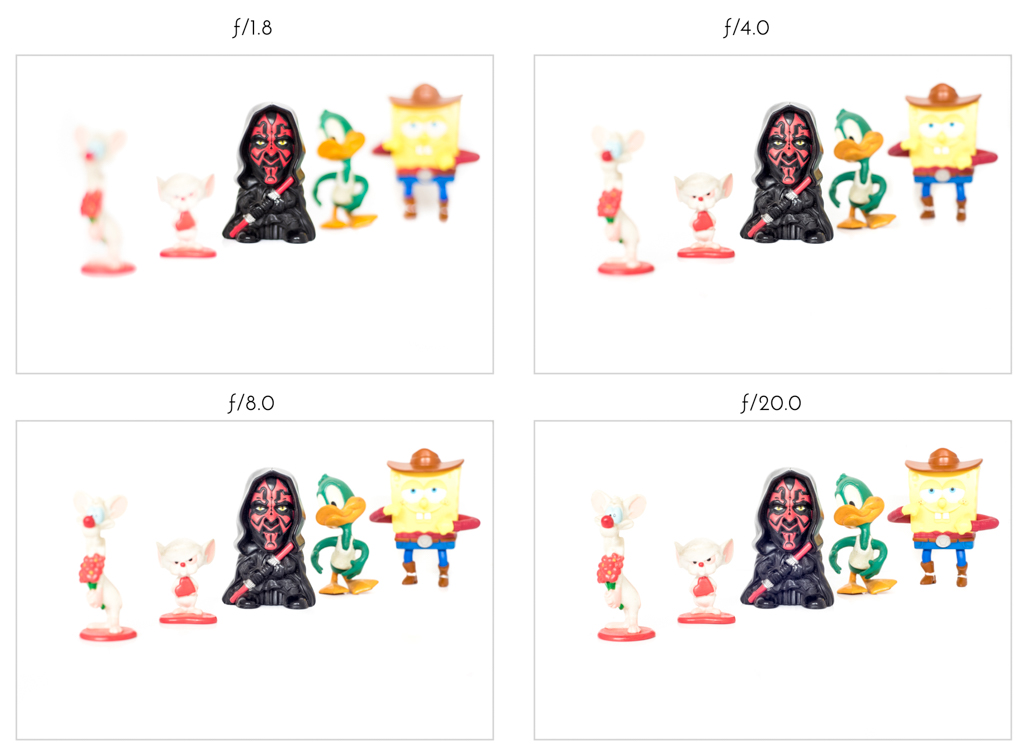 I have done another little setup for you to better illustrate depth of field depending on the focus distance.

You can see that when using the same f-stop the depth of field will become larger when the object focused on is more far away.

Relation between shutter speed and aperture

There exists a mutual relationship between shutter speed and aperture. If you change the shutter speed by one click in one direction and at the same time the f-stop in the opposite direction, the picture will be exposed to the same amount of light.

I have done a little setup for you to better illustrate it. You will notice that from one picture to another:

Settings to shoot in manual mode

There is no such thing as recommend the perfect settings to shoot a camera in manual mode. There is just to much to consider. So the main take away from this article is to understand what the different settings will do. I have summarized them here again:

I hope this article was helpful for you and if so I would love to hear a quick feedback.